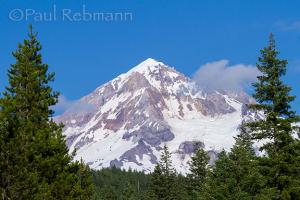 With the passing of Labor Day marking the end of summer from a cultural perspective, though not quite the closing of the season in either a meteorological or astronomical calendar, I thought summer vacations would be a fitting subject. As someone who still has a non-photography day job, vacations often present opportunities to pursue my part-time career while still providing recreation and 'down-time'. Over the years Virginia and I have traveled to a number of places, during which I have managed to capture some interesting subjects, branching out from my mainstay of Florida photography. Some of the highlights can be seen in my Pacific Northwest and Michigan galleries.

For instance, last summer took us to Oregon with a dip into the redwoods of northern California. After several days experiencing the Portland scene, we ventured out, first to a cabin at Detroit Lake where our local friends took us on some drives to higher altitudes to discover that the wildflowers were as abundant in mid-summer there as they were in the southern Appalachians in spring. Among these wildflowers were bird's-foot trefoil which I captured in an image called Fabaceae Circle. The camping portion of the trip began at Silver Falls State Park where I found Salmonberries in fruit next to our campsite. A short stay only allowed us to see some of the many waterfalls in this park, but I was very pleased with one of the images I made of the main falls that I titled Silver Falls Silver Mist. In Mt. Hood National Forest we stayed in a yurt along Lost Creek with an enchanting nature walk next to the campground, which revealed many subjects for my camera. A drive up a small, sometimes washed out, hillside road lead me to a vistas where I made Mt. Hood. At another location the conifers were framing the peak for Mt. Hood #2. We left the mountain area by way of the scenic Columbia River, and after another night in Portland headed to at Umpqua Lighthouse State Park for more camping, where we were introduced to the cute but noisy Douglas Squirrels. A scenic drive down the Oregon Coast Highway took us to the majestic redwoods of northern California.

A previous trip to the Pacific Northwest in 2003 had us visiting Washington and British Columbia. We started by visiting Mt. Rainier National Park, where I quickly realized that cloudless views of the peak were limited to early in the day. The next portion of that trip was into the Olympic Peninsula and the Pacific Ocean, where I saw sea stacks for the first time that I can remember, including Cake Rock at Rialto Beach. We also visited Dungeness Harbor before taking a ferry to Vancouver Island.

2009 found us in the upper peninsula of Michigan, staying with a group of friends from around the country in a cabin at Van Riper State Park which served as our base for exploring the area. One busy day included Big Bay Point Light, Alder Falls, which I also did in black and white, and both the upper and lower cascades on Pup Creek. Before culminating our day of sightseeing with locally brewed beers in Marquette the group visited an interesting geologic formation in Ishpeming where an outcrop of jaspilite can be seen at the top of a hill. On our way to our next destination Virginia and I visited Pictured Rocks National Seashore, where the sights included Munising Falls and Miners Castle jutting out into Lake Superior.

Combining vacations with photographic opportunities may mean not being in a place at the ultimate best time for imaging, is also presents subjects that I might not otherwise have captured.