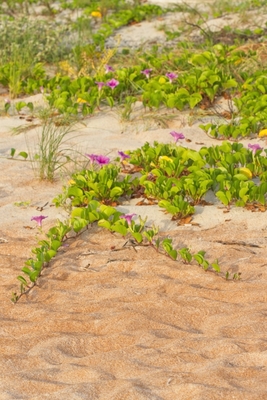 Since spring has arrived in Florida, I thought that a look at a few of the wildflowers that can be found at the beach would be a nice subject for this month. Only certain plants can survive in the salt spray and intense wind of the high energy Atlantic Coast. These plants 'living on the edge' also often help prevent dune erosion and even help build dunes by slowing down or blocking blowing sand, causing it to build up new dunes.

Usually the closest plant to the water is railroad vine, which gets its name from the tendancy to grow out onto the beach in a straight line.

Railroad vine growing out onto the beach


Railroad vine is one of the first plants to emerge after severe beach erosion. Because of this it is an important dune protection and restoration species. The other names for this morning-glory with the lavender flowers are goatsfoot, after the shape of the leaves, and bayhops for the fruit.


Another morning-glory of the seashore is beach morning glory which has white flowers and is usually farther up on the dunes from the ocean.


Another plant that sprouts from a buried seed bank soon after beach erosion, taking advantage of the lack of competition is sea rocket, named after the shape of the fruit.

In the photo above fresh green fruit is on the left. On the right is the lower half of dried brown fruit. Both the upper and lower portions of the fruit contain seeds. The top half breaks off and travels to another location while the lower half remains to reseed the area where the existing plant is.


There are two species of searocket in Florida, (coastal searocket) and Cakile edentula var. harperi (American, or Harper's searocket). They are very difficult to tell apart, although American searocket is only found in Florida along the Atlantic coast from St. Lucie County north while coastal searocket is found on most of Florida's coast being mainly absent from the Big Bend area.

Moving up the beach the next showy wildflower is often dune sunflower. There are separate east and west coast subspecies, plus a subspecies that is also found inland called the Cucumberleaf dune sunflower.


Both the east and west coast dune sunflowers tend to be sprawling, ascending only at the tips of the branches. This low-profile is a popular survival growth pattern with coastal plants.


Another yellow-petaled flower, the goldenasters have yellow to orange disks, unlike the dark disks of the dune sunflowers. This goldenaster has a single lower stem, branching in the upper part of the plant to multiple terminal flowers.


So when you visit the beach this year, keep an eye out for these plants, but remember, please stay off the dunes which can be easily damaged. The plant life helps protect the shoreline from erosion during noreasters, tropical storms and other high tide events.