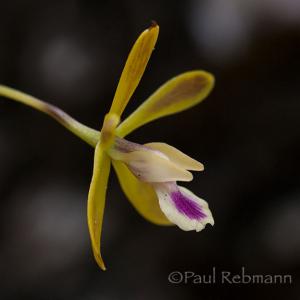 Florida is home to over a hundred orchid species, making up about half of the orchids found in North America.
Many may think of orchids as being a tropical plant, but orchids are one of the most diverse plant families and can be found almost anywhere on the planet.
I have been pleasantly surprised to come across orchids in both Michigan's upper peninsula and in Oregon's Mt. Hood National Forest.

People for centuries have had a particular fascination with orchids, with explorers traveling the world collecting new species for orchid fanciers to cultivate in their gardens and greenhouses.
This obsession, as characterized by the phrase "orchids put the cult in horticulture", has been observed and described in various books and other writings over the years.
One of the more widely known of these is Susan Orleans' "The Orchid Thief".
"The Scent of Scandal", a more recent book by Craig Pittman is not only an entertaining true story of Florida orchid mania, it is also an informative bibliography on the subject of orchids.

My appreciation of orchids is focused on finding and photographing the many native species that are found in Florida and elsewhere.
This quest has taken me into various natural and often inhospitable habitats around the state, both on my own, and on field trips with knowledgeable orchid experts.
I have been on several field trips lead by Paul Martin Brown, author of "Wild Orchids of Florida" and other orchid guides and publications.
On one of these outings, Paul made a statement typical of orchid enthusiasts, "there are two kinds of plants in the world, orchids and not orchids".
Thanks to Paul Martin Brown I have seen several orchids that I might not have found otherwise, including woodland ladiestresses, green addersmouth orchid and a new species that he just described about 8 years ago, Potts' plume orchid.

I have also had the pleasure of meeting Mike Owen, state biologist at Fakahatchee Strand Preserve State Park, on several occasions.
One of these was a Florida Native Plant Society field trip that he led, but the first time I met him was on my first of several visits to the Fakahatchee.
He stopped and talked to me as I was getting organized at my car in a parking area along Janes Scenic Drive.
Mike was very friendly and helpful in suggesting where I might want to go to look for interesting things to photograph.
In retrospect, he might have been also checking me out to ease his mind that I was not a poacher, as I could very easily appeared as such at first glance. The Fakahatchee is a very different place depending upon what time of year it is.
In late spring, at the end of the dry season, it is a fairly easy place to explore.
A person can walk down any of the old logging tram paths and off into the low areas with only a few puddles here and there and if your timing is good, very few bugs.
By mid summer, the water is up and the mosquitoes are in full blood-sucking force.
In mid winter, the mosquitoes are often gone, but the water is deep.
Getting to the pretty plants involves carefully wading through waist deep water as I did with Daniel Reed one December during some of south Florida's coldest weather on record.
The orchid highlights of that adventure were the night-scented and the clamshell.
A misstep from catching my boot on a submerged log resulted in my film camera getting dipped into the swamp.
The camera continued to work the remainder of that outing, but it soon died and I was unable to revive it as I had after it's dunking in the Apalachicola Forest's Bradwell Bay several years earlier.
This development resulted in my migrating to digital photography. Although I have seen and photographed many things in the Fakahatchee, the magnificent flower of the ghost orchid has eluded me there.
I have seen young not-yet-blooming plants in the strand, simply a few green threads of orchid roots on a tree.
The only flowers I have seen were on the plant in the Audubon Corkscrew Swamp Sanctuary.
This was only fairly recently discovered by a birder looking for owls after the devastating 2004 Florida hurricane season apparently cleared the view from the boardwalk to a ghost orchid plant high on a tree.
You can see my ghost orchid photos at Wild Florida Photo.

Not all of Florida's orchids are epiphytes, plants that grow on trees instead of the soil.
With the exception of the greenfly and Tampa butterfly orchids, most of those outside of tropical south Florida are terrestrial plants.
These include the leafless beaked lady orchid - Sacoila lanceolata - that can sometimes be found in highway right-of-ways.
The many species of ladiestresses are mostly terrestrial, with fragrant, or marsh, ladiestresses - Spiranthes odorata - being semi-aquatic, often growing in seasonally flooded areas.
The waterspider false reinorchid - Habenaria repens - is one of the few truly aquatic orchids, found along open shorelines, ditches and stagnant pools. Orchid hunting, in my case with a camera, can be a challenging and rewarding experience, taking a person into places they might not otherwise go and also experiencing many other interesting and beautiful aspects of our wild natural world.

The orchid photographs above can be purchased online by clicking on the desired image, and you can see all 33 of the Florida orchids that I have photographed so far at the Wild Florida Photo Orchidaceae page.