Argent Mirror by Paul Rebmann is in the 2022 Fine Art America Billboard Contest. Link to vote for Argent Mirror 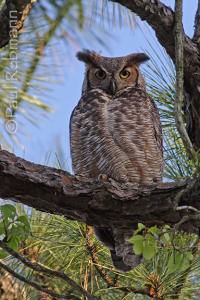 In 2007 my image of a Great Horned Owl titled "Don't Mess With My Chicks" won 3rd Place in the Florida Birds! category of the Orange Audubon (Orlando Florida) Kit & Sidney Chertok Nature Photography Contest. This is the story about how I made this photograph.

It was early March when I heard about a local bird rescue. My friend David Hartgrove, an expert birder and active leader in the local Audubon Society had been notified about a great horned owlet that had fallen out of a tree before it was ready to fledge. Having access to a cherry-picker from the local power company, he placed the owlet back in the tree with its siblings. Surprisingly, the owl parents had selected as a nest tree a tall longleaf pine tree in a vacant lot near the intersection of two main roads near the center of town. To top it off, it was now bike week, an event that brings several hundred thousand motorcycle enthusiasts to the area.

I had only seen a great horned owl once. That was in Hillsborough River State Park when my wife and I were heading back to the car as dusk was approaching. That owl was perched on a branch ahead of us along the trail and we stopped to admire it as long as we could as the mosquitoes were just coming out for their evening feeding and we were on the menu. Since I had not photographed one of these majestic birds I now had to take advantage of this opportunity.

After work I went to the location and sure enough, there were owls in the tree. At first I only saw one of the adults, but I eventually spotted three young owls and the other adult. With the rumble of Harleys passing nearby I was able to get some photos of both adults and owlets in the late afternoon light. I returned the next morning for some more shots.

The image of the adult owl appearing to be staring right at me stood out from the rest and gave me the impression that if it could it would say "Don't Mess With My Chicks".