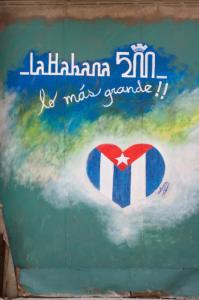 This month marks the 500th anniversary of the founding of Havana, Cuba. Spanish conquistadors held mass and the first city council meeting under a ceiba tree on November 16, 1519 creating La villa de San Cristóbal de La Habana. The ceiba tree is more commonly known as the kapoktree in English speaking countries. The scientific binomial name is Ceiba pentandra and another common name is white silk cotton tree for the silky fluff surrounding the seeds in the fruit of this tree. This silky fluff is also known as kapok and was frequently used as the flotation substance in life jackets before synthetic replacements were created. Ceiba trees are fast-growing and large with substantial root buttresses. A 2001 Orlando Sentinel article addressed the tradition and importance of the ceiba tree to Cubans. More information about and photos of these trees can be found at Wild Florida Photo.


Although my primary photographic focus is nature, I like to branch out into other genres especially when traveling. This was certainly the case when Virginia & I visited Cuba early this year. Like nearly everyone else that goes to Cuba I did photograph some old cars & trucks during our visit, while always keeping an eye out for other interesting subjects.


Some of these sights that caught my eye and lens included the grafitti, murals, signs and other street art that can be seen on the walls around Havana. In this isolated country, nearly all of the billboards and other large signs are what would be considered government propaganda. These seemed to be mostly intended to remind the people of the heroes and acheivements of the revolution. In the case of our visit (in 2019) many signs were also celebrating the 60th anniversary of the revolution or the 500th anniversary of the founding of Havana, or encouraging a Si (Yes) vote on the constitution in the election that was held the Sunday after we left. In case you are wondering, the new Cuban constitution passed with a Yes vote of over 90%. Some of the highlights of this constitution include recognition of private property, age and term limits for the president, presumption of innocence and right to legal counsel, a ban on discrimination based on gender, race, ethnic origin, sexual orientation, gender identity or disability and removal of the restriction that marriage be between one man and one woman.


One of the first murals that I came across just down the street from our room was a very colorful celebration of Havana's 500th anniversary (see the thumbnail at the beginning of this post). This apparently had been painted in Sept 2018 by the artist aolivera. The slogan "lo más grande" basically translates to "the biggest thing" or "the grandest thing".


The next morning while looking for a place to get a cup of coffee, I came upon a building that had a beveled corner that faced an intersection of two small city streets. That face of the building had an apple painted on it surrounding a faded painting of a Cuban flag under a window. The 'bite' in the apple bypassed an air conditioner sticking through the wall.


Around the corner of this building to the left of the above mural was a wire sculpture embedded in the wall. I saw it as a feminine figure in profile, kneeling and leaning backwards with the sun (or moon?) to the upper right, and below a pair of hands that appear to be trying to break through a crack in the wall. Virginia pointed out before I realized it, that the "woman" is the shape of Cuba. Looking at it that way, the hands are emerging from Isla de la Juventud (Isle of Youth - known as the Isle of Pines until 1978).


The wall to the right of the apple art was a mural of a woman with hair that morphed into electrical wires facing a bird on a plant.

mural of a woman's head, bird and plant

A lot of buildings in old Havana simply have a street number painted next to or over the door. At one building, the street number was surrounded by some simple facial caricatures. I wonder if these represent the occupants of the building?


Now we come to the first of the gaffiti art that I found on the streeta of Havana. Our local guide translated "No hay Cámeo" as "there are no brains". The work is signed by the graffiti artist MrSad26.


Near Parque Christo we walked down a side street between construction sites on boards laid down to help us stay above the standing water, which in old Havana was often tainted with sewage. Where the street opened up again there were these two large works of graffiti. The first was the words "Creativos Unidos", which translates to Creative United, and in the center was a woman walking with a paintbrush and paint bucket.


The second, nearby work was the word "Krepy" with very elaborate letters.

Along one of the busier streets (for pedestrians) in old Havana was this mural. The entire slogan in the banner is "Con la Guardid - en Aito", in English this is "With the Guard - not Genuine".


The final mural I will show you was not actually on the street, but in the entranceway into an elementary school. Also, this is probably mass reproduced and I an guessing that it is seen in many schools in Cuba. It shows Jose Marti, a Cuban national hero for his efforts leading to Cuban independance from Spain in the 1800's, along with three of the leaders of the more recent Cuban revolution - Raúl Castro, Che Guevara and Fidel Castro - plus the boat named Granma that they used to return to Cuba from exile in Mexico in 1956.


Continuing with this bit of Cuban history, the boat Granma is now on display in a military museum in Havana.


More Cuban murals and sculptures can be seen in my earlier Matanzas Cuba blog post.