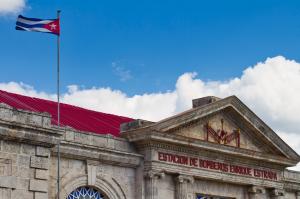 In February of 2019 Virginia & I had the opportunity to visit Cuba as part of a people-to-people exchange tour.
Note that as of June 2019 these tours and day visits by cruise ships are no longer allowed by the United States.
The first day of the organized tour was in the town of Matanzas, in the province of the same name.
Here are some of my favorite images from that day.


A scenic ride on a modern Chinese-built motorbus took us along the coast from Havana to Matanzas. Our first stop was at Ermita de Monserrate (Hermitage of Montserrat) in an area called Simpson Heights.
This structure was originally built in 1875 by a Cuban subsiduiary of the Natural Charity Society in Catalonia that thought the hiltop reminded them of Montserrat in Spain. The building deteriorated during the 1900's and was restored in 2010.
Here we were introduced to the dances of Cuba with a live musical performance.
This impressive artwork was above the stage and below the alcove containing a statue very similar to "Our Lady of Montserrat" that is at a monastary in Catalonia.


After the dancing at Ermita de Monserrate we walked down the hill into the town of Matanzas.
As we neared the local zoo, I photographed this 1952 Chevrolet Deluxe Coupe, one of the many old cars we saw while in Cuba, parked in a carport next to a house.
The prevalence of old cars and other vehicles in Cuba is a result of Cuban laws that until recently severely restricted buying and selling cars that were not already on the road in Cuba before 1959. After 2011 used car sales were opened up and simplified, but new car imports and purchases still fell under the old rules, which among other things requires goverment permission.


In Matanzas there is a small zoo called Watkin Park. The walls surrounding the zoo are made in a very artistic style and bright colors.


On the other side of Watkin Park the wall contained a series of murals.
In front of one of these murals was parked a Kanuni MZ 301 motorcycle.
Kanuni is a Turkish motorcycle company that bought the patents to manufacture the 301 from the German motorcycle company MZ (Motorenwerke Zschopau GmbH) in 1993.

Lunch was at Hostal Azul where we were welcomed with cups of delicious and very refreshing pineapple juice.
After lunch it was down to the waterfront along the Rio San Juan for a stop at Lolo Galeria-Taller (gallery-workshop).
Lolo is Osmany Betancourt, a renowned Cuban sculptor. In front of the gallery and workshop was a sculpture that was part of his work titled "La Comparsita".


Nearby along the riverfront was a sculpture titled "Philanthropy" by Jose Carlos, one of the other artists at Lolo's workshop.


The walking tour of Matanzas ended when we met up with our bus in Plaza de la Vigia, which translates to Plaza of the Lookout, a historical reference to when Matanzas was troubled by pirates and smugglers. The plaza is surrounded by colorful buildings.


Next to the plaza was Estación de Bomberos Enrique Estrada - the Enrique Estrada Fire Station, which can be seen in the thumbnail image at the beginning of this post. This is the oldest fire station in Cuba.
Original construction was completed in 1900 and the building was recently (2018) renovated and is now serving as a museum and apparently also still as a working fire station.


In Plaza De La Vigia is a monument to the Unknown Soldier Mambí.
Mambí translates to 'rebel' and in Cuba refers to the Cuban fighters in the first insurrection against Spain in 1868.
This uprising is known variously as the War of '68, The Great War and the Ten Years' War.


That is just a small sample of one day in Cuba. More of the week to come.