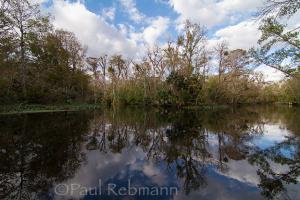 The name is derived from ak-lowahe, meaning muddy in the Creek language.
After the earlier Timucua people of this area were vanquished by disease and early colonists, Creeks moved in as they were pushed out of their traditional homelands to the north.
Those native peoples that remained in Florida came to be known as Seminoles. The Ocklawaha River was one of Florida's earliest tourist attractions after the Civil War, with specially designed steamboats taking passengers along a wild jungle cruise up the Ocklawaha to Silver Springs.
This activity peaked in the 1870's and diminished after railroad service was established to Ocala in 1881. The Ocklawaha was intended to be a major part of the cross Florida barge canal, a project started several times and canceled in the early 1970's but not before Rodman dam was built, creating a reservoir out of part of the river.

For a complete history of the canal, one should read Ditch of Dreams: The Cross Florida Barge Canal and the Struggle for Florida's Future by Steven Noll and David Tegeder.
The path of the canal is now the Marjorie Harris Carr Cross Florida Greenway, named for one of the people most active in the efforts to stop the canal from being built. The July-August 2012 issue of Audubon Magazine featured an article by Ted Williams about the Ocklawaha River titled "Has One Florida Dam's Day Finally Come?".
Recommended reading for anyone who would like to know more about this beautiful river and the struggle to remove a remnant dam from the abandoned cross-Florida canal project. Recently a new impetus to removing the dam has come from an agreement to promote Ocklawaha River restoration to improve the St. Johns River water quality to offset the effects of planned dredging for the port at Jacksonville, The sections of the Ocklawaha that are still natural are some of the most scenic waterways in Florida and make for excellent canoeing and kayaking. The river is enjoyed by many, including paddlers, birders, fishermen and others. It is a favorite of both myself & Virginia, and we like to be on this beautiful river as often as possible. All of the photographs in this blog post were made along the Ocklawaha River.