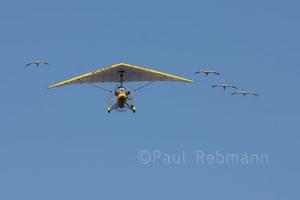 Each year since 2001 the non-profit organization Operation Migration has used ultralight aircraft to lead that year's juvenile whooping cranes from the breeding grounds in Wisconsin to Florida for the winter. After being shown the migration route once, the cranes head north on their own in the spring and return to Florida each succeeding winter.

In the winter of 2010-2011 I planned on going to one of the public flyover events and was all set to see the whoopers when they came through Marion County in December on their way to Chassahowitzka National Wildlife Refuge. Weather kept the ultralights & cranes in north Florida where they waited until after the holidays, and then resumed the final leg of their flight in January.

This photograph of four of the whooping cranes and the ultralight aircraft are from the flyover event in Marion County just before the cranes arrived at their last stop. The other half of this flock wintered at St. Marks National Wildlife Refuge.