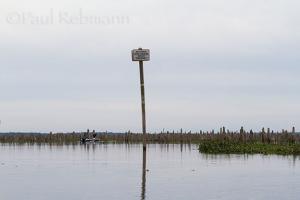 Rodman Reservoir was created by damming a section of the Ocklawaha River as part of the abandoned cross-Florida barge canal project. Even though the canal project was cancelled before completion, and the path of the canal is now the Marjorie Harris Carr Cross Florida Greenway, this reservoir remains. About every three years, the water level is lowered primarily to control invasive aquatic vegetation. These drawdowns allow muck from decaying vegetation a chance to consolidate and oxidize, reducing the thickness of the muck and providing a firmer lake bottom, more suitable for fish and wildlife. This winter while the lake level was down I kayaked on two different days, once near the dam, and the second paddle near Eureka. It was a cool, gray January morning when I arrived at the temporary Kenwood Landing boat ramp. Several dozen vehicles with trailers filled about half of the parking area and the ramp was busy with more arrivals so I parked at the far end and launched from the bank. As I paddled down the canal between the now exposed spoil banks, tree swallows swooped and soared around me and I soon saw the first bald eagle of the day. I know there were at least two eagles, but I am not sure if there were more or I just kept seeing those same birds all day. On the north side of the canal was shallow water with many slanting tree trunks where the crusher was used to clear the forest in preparation for the reservoir. With the water lowered, these provided many perches for the eagles, osprey, gulls, cormorants and herons. On the south side of the canal mostly tall thin stumps are exposed that apparently were trees still standing when the area was originally flooded. Slowly gliding my kayak between these tall trunks imparted a feeling of crossing the river Styx. A number of massive cypress stumps were also present. A sign marks the point where the historic Ocklawaha River channel diverges from the canal (photo at beginning of this post). The channel is a clear path that winds through the forest of stumps outlining where the original riverbanks were. I paddled up the original river imagining what it might have been like when these trees were alive and provided a canopy of green. Was it like the river below the dam to the St. Johns, or more like the still-natural upstream section of river from the Silver River to Eureka?

I continued my paddle looking for some of the springs that are covered by the reservoir most of the time but exposed during the drawdowns. The only one that was noticeable was the small flow of Sims Spring. I continued until the original river channel again joined the canal, then turned around and headed back to the boat ramp. My search for springs will continue on another day.


By contrast it was a beautiful, sunny day in early March when I launched my kayak from the ramp near the 316 bridge at Eureka. A group of teens in an 'Outward Bound' type expedition paddled up in canoes as I was putting my boat in the water. They were near the end of a week-long canoe-camping trip on the Ocklawaha. As I passed the Ocklawaha Canoe Outpost, more kayakers were starting their Sunday afternoon paddles. I would see all these people again before the day was over.

To answer a common question I get when out in a kayak or canoe, yes I did see alligators. Several were lazily sunning themselves on the banks as I headed downstream. Several times a river otter appeared ahead of me, but I was unable to get any photos other than its back barely breaking the surface. While I was stopped to take pictures, one of the kayakers I had passed previously caught up with me. As we paddled along together for a while I mentioned that I was looking for Cannon Springs, and he told me what to look for to know where to turn. This kayaker turned out to be Mark Chiappini, owner of the famous general store & gas station in Melrose. I did find Cannon Springs, and managed to make some photographs before the crowds arrived. By the time I left, everyone that I had seen on the river that day was there to see the spring before the lake covers it up again. In one of the photographs the light on the clear water of the spring made for an impressionist, sort of pointillist style, image, as can be seen below. Unlike everyone else there who were continuing downstream, either for another night camping or to take out at Orange Springs where they had shuttled their vehicles earlier, I headed back upstream towards Eureka. This was a strenuous paddle as the current was noticeable, possibly the flow from Moss Bluff Dam had been increased to start refilling Rodman Reservoir as the drawdown was coming to an end. I did pause to photograph a limpkin wading through the spatterdock in the river. My last stop was at the eerily out of place Eureka Lock. Rising up out of a side pool of the river and the woods. Constructed for passage from the Rodman pool to the Eureka pool, then abandoned in place when the project was cancelled. Fortunately the Eureka pool was never created, as that would have destroyed what is probably the most scenic and wild section of the Ocklawaha River, from the Silver River to Eureka. For those interested in restoration of the Ockalwaha River check out Florida Defenders of the Environment.