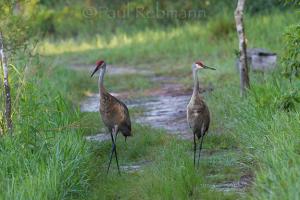 One of the many cool things about living in Florida is experiencing Sandhill cranes. We have two distinct populations of these majestic birds in the Sunshine State. About five thousand Florida sandhill cranes live here year-round and are considered a separate subspecies from the more numerous greater sandhill cranes that only winter here. The migratory cranes breed in the Great Lakes region of North America and arrive in large flocks during November and December. This increases the crane population of the state about six-fold until they depart, typically March and April. Sometimes huge numbers of cranes gather at Paynes Prairie, or other prairies near Gainesville. I keep missing this event despite numerous visits to likely spots during different winters. This January I was at Sweetwater Wetlands Park next to Paynes Prairie thrilled at all of the limpkins and black-bellied whistling-ducks I was seeing. After spending the morning photographing those and many other birds, I stopped by Paynes Prairie State Park to drop off some ice where my wife was having a women's camping weekend with friends. After that, I was almost home from the over 2 hour drive when Virginia texted that they were on LaChua Trail and there were hundreds of sandhill cranes on the prairie! I might have missed that, but the next month I was back at Sweetwater Wetlands Park co-leading a Birds of a Feather Fest field trip with Greg Miller of The Big Year, where we saw hundreds of sandhill cranes flying overhead.

The Florida sandhill cranes are mostly seen in pairs or small groups, sometimes along the side of the road or even strolling through neighborhoods. They are monogamous, breeding in late winter and spring and usually laying two eggs on a mat of vegetation in shallow water. For many years, usually first thing in the morning while camping, I would often have a "what on earth is that?" moment when I heard sandhill cranes honking in the distance. I would take a few moments to figure out what I was hearing, and now most of the time immediately realize the source of the distinctive call. Cranes go back 2-1/2 million years with the oldest known crane fossils discovered in a shell pit near Sarasota, Florida. Up until recently sandhill cranes were considered the same genus as whooping cranes, but in 2016 Grus canadensis was moved to the genus Antigone joining species from Asia and Australia. Antigone is the name of Oedipus's daughter/half-sister in Greek mythology.