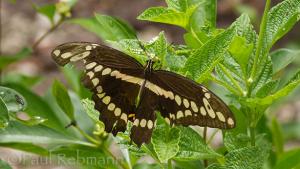 A very wet native plant field trip this May resulted in my seeing two butterflies that were new to me, including the rare Schaus' swallowtail. This trip to Dagny Johnson Key Largo Hammock Botanical State Park was one of many activities during the Florida Native Plant Society annual state conference.
Myself and two other attendees braved the early start of this year's rainy season to visit an area not open to the public. Our leader was Janice Duquesnei, Florida State Parks keys biologist.

Schaus' swallowtail is a rare and endangered butterfly is now only found on a couple of the upper Florida keys and in a few small sites nearby on the mainland. It has the distinction of being one of the first insects given federal protection, being listed as threatened in 1976, then as endangered in 1984.
Heraclides aristodemus ponceanus is a butterfly of tropical hardwood hammocks, historically from the greater Miami area to Lower Matecumbe Key and is one of the subspecies of the Island Swallowtail found throughout the West Indies.

These rare butterflies are similar to the closely related giant swallowtail, but the 'tails' of the Schaus' swallowtail have a yellow margin instead of a yellow spot. Sexes are similar to each other except that the males have yellow-tipped antennae and the females dark-tipped antennae. This species' common name is in honor of US entomologist & botanist William Schaus (1858-1942) who is known primarily for his contributions to the knowledge of Neotropical Lepidoptera (butterflies & moths).

The primary larval host plants of the Schaus' swallowtail are two members of the citrus family, sea torchwood and wild lime. For the past several years there have been habitat restoration projects in Biscayne National Park to remove invasive plants and replace them with torchwood and wild lime. In conjunction with these mostly volunteer projects, classroom curriculum has been created for Miami area schools to educate about Schaus' swallowtail and some of the other rare and endangered species and the importance of habitat in their survival. This curriculum included the creation of school gardens with host plants. You can read more about these projects at The Schaus Swallowtail Habitat Enhancement Project.

Sea torchwood is an occasional shrub or small tree of hammocks along the Florida east coast from Flagler County into the Keys. The range extends through the Caribbean including the Bahamas, Cuba, Jamaica, Hispaniola, Puerto Rico and the Virgin Islands. It is also found in Mexico and Belize.
Amyris elemifera is an evergreen with light brown bark growing up to about sixteen feet tall. The drooping leaves are opposite and compound with three to five leaflets. Leaflets are petiolate, ovate-lanceolate, one to three inches long with glandular dots on the top surface and pointed tips. The tiny white flowers are in branching clusters and the fruit is a small purple to black ovoid drupe with glandular dots that is less than a half inch long.
The species name is derived from the term elemi, referring to a fragrant resin used in essential oils and varnishes. The Mexican variety of elemi is made from torchwood, other parts of the world use different trees to make their elemi. Amyris elemifera is also the larval host plant for the Bahamian swallowtail.

Wild lime is a frequent evergreen shrub or small tree of hammocks in the central and south Florida peninsula and the Keys. The range includes Texas, the West Indies and Mexico.
One of the most distinguishing traits of wild lime is the winged rachis on the alternate compound leaves. There are seven to nine small leaflets that are each less than one and a quarter inches long and less than three-quarters inches wide with crenate margins on at least the upper half of the leaflet. The yellow-green flowers are very small and appear in the spring. The fruit is a shiny black seed in a brownish husk. Zanthoxylum fagara is also a larval host plant for the giant swallowtail.

The other butterfly seen on that field trip new to me was the Julia butterfly. Dryas iulia var. largo is one of Florida's longwing butterlfies along with the gulf fritillary and the state butterfly, zebra longwing.