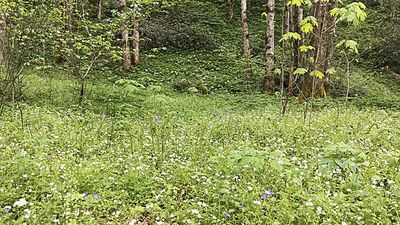 Decades ago when I lived and worked in Knoxville as a radio broadcast engineer I spent some time (but not enough) in the Great Smoky Mountains National Park. Last spring I returned to the Smoky Mountains with my best friend Daniel and my brother Bob who offered to introduce Daniel & I to trout fishing in the mountain streams. After one night of car camping, we backpacked up to a backcountry campsite for several nights in the national park.


This trip was not all camping and trout fishing, although surprizingly I did hook and land my first rainbow trout which as an added bonus was a keeper(over the minimum size limit). Added to the fish Bob caught, we had a delicious trout dinner in camp. While in the mountains walking the trails, rock-hopping up the streams and around camp I photographed a number of various nature subjects, a few of which I will share here.

Near our first campsite along Big Creek there was a huge shelf fungus on a tree. This appears to be Dryad's saddle, one of the shelf fungi. A dryad is a mythical wood-nymph, and it is easy to imagine one sitting on one of these fungi.

Another large bracket fungus that I came across while walking the streamside trails was hemlock varnish shelf.

Some of the varnish shelf fungi were occupied not by dryads but by pleasing fungus beetles, several of which were seen both on the fungi and the chunks of bark that were also on the ground next to the tree.


Possibly these beetles are pleasing because they are so colorful? They are found on various hard bracket fungi in eastern North America from the northern half of Florida to southern Ontario and Quebec.

There was a pretty little shiny beetle on a rhododendron bush between the creek and camp. This appears to be a member of the Chrysomelidae - leaf beetles family. It looks very similar to one of the Altica genus of metalic flea beetles.

One day I was noticed a snail on the trail. This terrestrial snail seems to be a white-lip globe snail. These terrestial snails can be found throughout the eastern United States in river floodplains, wetlands and limestone ledges.

Since it was spring in the mountians, there were wildflowers, incuding golden ragwort, with prominent yellow flowers growing along the streams and trails.


Golden ragwort is typically found in floodplains and ranges from north Florida into Canada.


Like the golden ragwort, these buttercups also favor wet habitats such as where this plant was, alongside a mountain stream called Big Creek. Like a number of the buttercup species, this plant is toxic when fresh and can irritate the skin, leading to the common name blisterwort.

Feathery false Solomon's seal is a wildflower that I am familiar with from previous spring hikes in the Appalachian mountains. Also called feathery false lily of the valley and simply false Solomon seal, this plant can be found from one county in the Florida panhandle northward throughout both the eastern and western United States and into Canada.

One of the last plants that I photographed on this hike was not even in bloom, but still identifiable by its distinctive leaves as a terrestrial orchid called downy rattlesnake plantain. Like the false Solomon seal, Liberty County in the panhandle is the only place in Florida that it is found, although it ranges throughout the eastern United States and into Ontario and Quebec.


I photographed a number of other plants and animals during this Smoky Mountain visit, but all of those featured here can also be found in some part of Florida, the setting for most of my nature exploration and photography.