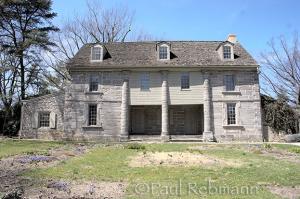 William Bartram was born in 1738 in the family home (pictured here at the end of March) overlooking the Schuylkill River near Philadelphia. His father was John Bartram, widely considered the Father of American Botany and co-founder with Benjamin Franklin and others of the Philadelphia Philosophical Society. When William was 27 he accompanied his father on his first expedition into Georgia and Florida. The purpose of this trip was to provide a report and collection of plants to King George III on the area recently acquired by England from Spain.

After that expedition, William returned to the southeastern colonies on behalf of private English benefactors who in return received much of what he collected. He also attempted at one point to start a plantation in Florida along the St. Johns River, an endeavor that did not last long. After returning to Pennsylvania, he wrote and eventually published his famous and popular book Travels through North and South Carolina, Georgia, East and West Florida. In it he described the plants and creatures that he encountered in this strange wild land, including the natives, with which he had many interactions. The chief of the Alachua tribe called William 'puc-puggy', which was 'flower hunter' in their language. As a result of the botanical knowledge that he brought back to scientists with his drawings and collections, a number of species bear the Bartram name in William's honor (and also a few for his father). The images here include several that I have photographed, one of these is Bartram's Ixia, a small wildflower that is only found in northeastern Florida, mostly in the area surrounding Bartram's failed plantation. Calydorea caelestina blooms in the late spring and into the summer. Each of the violet-blue flowers open only once early in the day, start closing during mid-morning, and are usually gone by noon. When not in bloom, the plant is nondescript, appearing as though it was some kind of grass. Travels included a drawing of this Ixea. Here is a sample from Travels where William is returning down the St. Johns river in his small boat and has spent a pleasant night camped in an orange grove along the river. After arising and attending to his vessel, he ventures into a field beyond the grove: "What a beautiful display of vegetation is here before me! Seemingly unlimited in extent and variety: how the dew-drops twinkle and play upon the sight, trembling on the tips of the lucid, green savanna, sparkling as the gem that flames on the turban of the eastern prince. See the pearly tears rolling off the buds of the expanding Granadilla:* behold the azure fields of cerulean Ixia!"
*Granadilla = Passiflora incarnata - purple passionflower, maypop Another interesting plant named for William is Bartram's airplant - Tillandsia bartramii. This epiphytic plant anchors itself on tree branches and trunks and derives sustenance by absorbing nutrients from the rain, dew, dust, decaying leaves and insect matter. Bartram's airplant can be found in Florida, Georgia, South Carolina and Tamaulipas, Mexico. In the image here, a tubular violet flower can be seen emerging from rose-red bracts. The plant forms a globular cluster of needle-like leaves. A documentary titled Cultivating the Wild: William Bartram's Travels is in the works centered around William Bartram and the nature that he explored. A sample of this project can be seen at https://vimeo.com/148183049.

When Travels was first published, many readers were skeptical about some of his descriptions, such as the size, ferocity and number of alligators that he encountered, and of the civilized nature of the native tribes, which many people at the time considered savages. As time passed and more people ventured into the same areas, they discovered that his fantastical descriptions did have a basis in fact.

As I venture into the wild natural areas of Florida while hiking, canoeing or kayaking, I sometimes try to imagine what this must have seemed like to a young man from Pennsylvania over two hundred years ago.