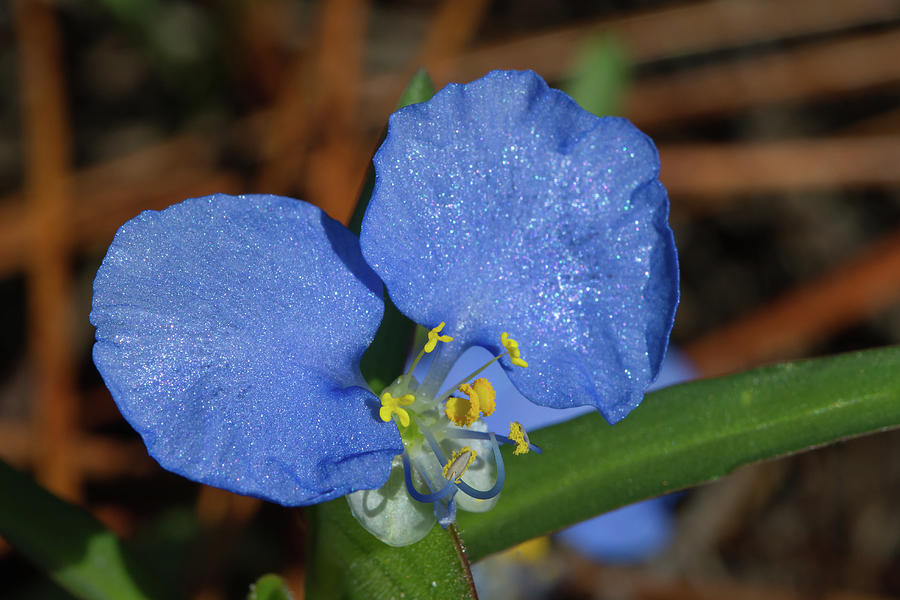 A close up front view of a whitemouth dayflower.

A common wildflower of sandhills, scrub and disturbed sites throughout most of Florida. The range includes much of the eastern United States, northeast into New York, north to the Great Lakes states and South Dakota and west into Wyoming, Colorado and Arizona.
The flowers have two large blue petals and one smaller petal that is much lighter, usually white to nearly transparent. The flowers wither the day after opening, usually by midday. Below the flower is a leaflike spathe, or bract, that is joined at the base and remains after the flower is spent. Flowers have three fertile stamens and three infertile staminodes. The central stamen and staminodes are white to yellow with yellow anther and antherodes, the antherodes are cruciform. The other two stamens are often blue at the base, lightening towards their smaller yellow anthers. The pistol if present may be either blue or white. The alternate leaves are 5-15cm (2 - 6 in.) long and 0.3-4cm (up to a little over 1-1/2 in.) wide, clasping the stem with earlike lobes at the top of the clasping sheath.