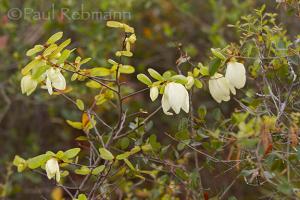 This is the first in a series of posts that will focus on images in the Only in Florida exhibit, now on display in the Lyonia Gallery in Deltona. In 1774 while traveling in present day Putnam county from Spaldings lower store at Stokes Landing to Halfway pond (now known as Cowpen Lake) William Bartram saw many new shrubs, "particularly a species of annona...". Bartram went on to describe what is now known as Asimina obovata in his Travels through North & South Carolina, Georgia, East & West Florida, a book that was not published until 1791. Imagine how difficult it was to get a book published in the 18th century, even if your dad (John Bartram) started a really cool club (the American Philosophical Society) with one of the area's most famous printers (Benjamin Franklin), who was known to come over and hang out at the house for chats (Bartram's Gardens).

The home of John & William Bartram at Bartram Gardens, Philadelphia.

In the meantime André Michaux was exploring Florida for France in 1787. Michaux also noticed this plant near the Indian River in present day Brevard County where he "collected two Annonas, one of which was a new species with very large white flowers...". Both of these early botanical explorers were describing an endemic Florida species - Asimina obovata - or bigflower pawpaw. This plant is only found in the Florida peninsula from just south of Jacksonville to Lake Okeechobee.

Bigflower Pawpaw grows in a variety of habitats, but tends towards scrubby, sandy areas. Most frequently a shrub it can become treelike and reach up to 15 feet tall. The large white to greenish-white flowers can be seen from March through May after the current season's new leaves have emerged. The flowers form at the ends of short lateral shoots. The tips of these shoots and the veins on the undersides of the leaves are red-pubescent(fuzzy), one of the distinguishing marks that help identify this species. Another is the maroon corrugated area on the inside base of the inner petals.

Showing the maroon base on the inside of the petals.