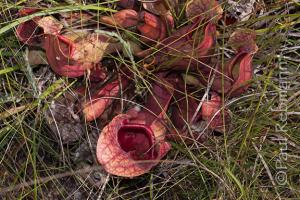 The Sarraceniaceae is a family of carnivorous plants known as the pitcher-plants. Members of this plant family have modified leaves that form a pitcher of various shapes and colors that traps and digests insects. This allows these plants to thrive in low-nutrient soils as is found in some bogs and other usually wet locations. Unlike the better-known venus fly-trap, the pitcher-plants catch their prey without any moving parts, using the shape of the pitcher, hairs and/or chemicals instead to capture their meals.

Other than the California pitcherplant - Darlingtonia californica - on the west coast, all of the North American species of the pitcher-plant family are in the genus Sarracenia. A number of these can be found in the southeastern states, with one - Sarracenia purpurea - also occurring across the colder regions of the continent. In Florida the most widespread of these is the hooded pitcherplant. Sarracenia minor is the only species found in the Florida peninsula., occurring from just north of Lake Okeechobee, west into the central panhandle and into Georgia and the Carolinas. While I see these fairly frequently, they are seldom as nice looking and not obscured by other plants as they were early this May in Tiger Bay State Forest. All of the other pitcherplants are absent from the Florida peninsula, occurring mostly in the panhandle and various southeastern states. I have seen several of these during Florida Native Plant Society conference field trips in the Apalachicola National Forest. During these and other visits in the forest, I have seen many color variations of Sarracenia flava, yellow pitcherplants. At one of the locations visited, I went back after the field trip and made the image that I call O'Sarracenia. This memorial day weekend I visited Tate's Hell State Forest, stopping at an area that was recently burned to check out a big patch of Oceola's Plume. Here I also discovered fresh leaves of parrot pitcherplants. In this species, the hood resembles a parrot head and obscures the small opening that allows insects into the trap. There are many variations on the details of how the area got its name, but all revolve around Cebe Tate, a farmer who in 1875 went hunting a panther that was killing his livestock and had a lengthily and harrowing experience in the wild. It alleged that when he emerged from the swampland he stated that that ..."I just came from Hell". After which the area came to be known as Tate's Hell. Now a state forest , it is popular with hunters, paddlers enjoying the New River, birders seeking red-cockaded woodpeckers, migrating warblers and more, plus other nature lovers. My primary objective this day was to find whitetop pitcherplants, a species that I possibly seen before late in the year. They were dried, brown and mostly toppled pitchers along the Florida Trail in Blackwater River State Forest and could have been either yellow (S. flava) or whitetop (S. leucophylla) pitcherplants. After scouting around in Tate's Hell, stopping here and there to photograph various subjects, I finally found some Sarracenia leucophylla and was able to make some photographs before a thunderstorm moved in and sent me on my way.

While May is not the only time you can see pitcherplants, it does happen that all of the images seen here were taken in May of various years. Most of these species would probably have prettier flowers earlier in the season, before the drooping petals fall off.