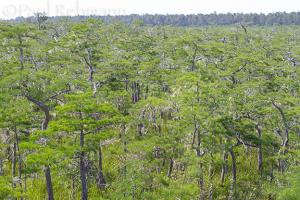 Along with pines, oaks and tupelo one of the typically 'Florida' trees is the cypress. Florida has two species, the bald cypress and the pond cypress.

Pond cypress is limited to the Southeastern coastal plain from Louisiana to Virginia, plus Delaware. Bald cypress has a wider range, found west into Texas and Oklahoma and north into Illinois through New York state. Pond cypress is also found in fewer habitats, mostly flatwoods ponds and along the edges of lakes, while bald cypress is frequently found in swamps, floodplains and along streams. Pond cypress - Taxodium ascendens - has small leaves that are held tight against the branchlets that usually grow upward. Bald cypress - Taxodium distichum - leaves are spreading with two opposite rows of needle-like leaflets.

When certain conditions exist, pond cypress sometimes can grow very old but remain fairly small for its age. There are two main areas that are known for their large strands of dwarf cypress. One is in the Picayune Strand State Forest in southwest Florida. Another is located in the Florida panhandle in Tate's Hell State Forest.

I almost made it to see the dwarf cypress in Picayune Strand several years ago when I was in the area to attend a Florida Native Plant Society conference, but was driven off the trail by thunderstorms and did not have a chance to go back while I was there.

This spring, after severe weather curtailed what was supposed to be a long camping weekend at Three Rivers State Park, Virginia & I stopped by and checked out the dwarf cypress strand in Tate's Hell. At this time, the spring greening was just getting started and the strand was full of water from the recent heavy rains, as can barely be seen in the image above. Most of these cypress trees are less than fifteen feet tall, even though they may be hundreds of years old. These dwarf cypress are often called 'hatrack cypress', a term that seems fitting when looking at the tree in the image below. I was back in the area Memorial Day weekend and headed out to Tate's Hell on a whitetop pitcherplant search (see the previous blog post 'Pitcherplants in May') when I again stopped by the dwarf cypress strand. The cypress were greener and the water was lower, and I also found some interesting scenes along the edge of the strand where American white waterlilies were growing in the roadside ditches. For more information and to see more photos of both pond and bald cypress trees, visit the Taxodium page at Wild Florida Photo.