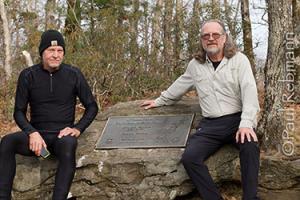 Last fall as an important project at my day job was coming to a close, I mentioned to my friend Daniel that I had some vacation time I needed to take before the end of the year and we began discussing possible outdoor trips. Considering various kayaking and/or backpacking locations for what was looking like a mid-December trip, I sent an e-mail that included "I did have what is probably a crazy idea that we might want to hike the first stretch of the Appalachian Trail...". Daniel did not think that was so crazy and we proceeded our planning from there.

We both have done many backpacking trips, from overnight to a week, but had never been on the Appalachian Trail for more than a few miles. Having just turned 60 I thought it was about time that I did an AT section hike. Since it had been a number of years since either of us had been backpacking in the mountains and with the time of the year creating the possibility of seriously cold weather, snow and ice, gear and clothing selection took into consideration weight and likely cold hiking and camping conditions.

Following almost two months of planning, gear selection and stepped up physical training, we met at one of the campsites in the Three Forks area near where the Appalachian Trail crosses the Noontootla River. Noontootla Creek #1 was one of the photographs I made near camp the next morning before we headed off to drop off a cache of food along the trail and then to Neel Gap to start the hike.

It was very late in the day as we reached the highest peak of our hike, where we were treated to a beautiful View from Blood Mountain of the Blue Ridge. This is also the greatest elevation in the Apalachicola River watershed making Blood Mountain the highest source of water that reaches Florida. Amazing to think that rain falling on this remote north Georgia peak could be part of the fresh water essential to the oysters in Apalachicola Bay.

After passing the historic rebuilt stone AT shelter, we descended down to a group of campsites where we stopped for the night just as the sun was setting.

At the nearby water source, we met the first of several groups of through hikers nearing the end of their long journey on the AT.

A surprise to both of us was how many other hikers were also on the trail at this time of year. Of the several dozen people we saw during our trek, almost ten were finishing up hikes from Maine. Most of the times that I have been backpacking, I seldom see other people, and if I do it is usually only 1 or 2, or a single group. Hiking the AT is much more social than either Daniel or myself were used to.

The second day of hiking was a long one and included the View from Big Cedar Mountain along the way. That night was the only rain of the trip while we were snug in the bivies and mostly dry under the tarp.

A short day of hiking brought us to Gooch Gap were we camped on a long unused roadbed on the side of a hill near where we stashed supplies. The next morning was the only one where I got up before the sun - just barely - and captured Appalachian Sunrise. Also that morning I photographed the small nearby streams making End of the Road Falls and Walden Creek Cascade.

Taking a break and refilling water bottles at Justus Creek also provided a photographic opportunity. This was the last water source until Hawk Mountain shelter, which we reached right around dusk, ending one of the longer days on the trail.

A short day of hiking allowed a side trek to Long Creek Falls and retrieval of my car at Neel Gap after selecting a campsite for our last two nights. Long Creek Falls Swoosh is a perspective looking down from a midpoint of the several cascades.

We drove up to the approach parking lot and hiked up to Springer Mountain then back down to Three Forks to finish our section hike. The View from Springer Mountain was particularly nice as we enjoyed our accomplishment at reaching the summit of the southern terminus of the Appalachian Trail. See the image at the head of this post, that is Daniel on the left and I am on the right.

On the last morning I made Noontootla Creek #4 before heading back home to Florida.