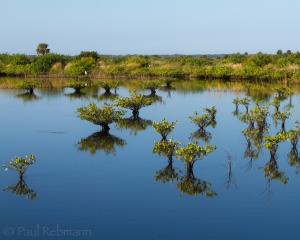 Mangroves are a group of plants with a shared common name that has more to do with where and how they grow than with their family or genus relationships. Mangroves are shrubs or trees that are halophiles, meaning that they can grow in salt water. To do this they have particular characteristics that help them deal with their saline environment.


The four native mangroves that occur in Florida are listed here in the order of their preferred habitat, from wettest(lowest) to driest(highest).

The most cold tolerant of these four mangroves is the black while the white and black mangroves tolerate the highest salinity. Buttonwood is probably both the least cold and salt tolerant of the four. In Florida mangroves are mostly limited to the coastal areas of the peninsula although red and black mangroves can be found in a few panhandle counties. Red mangroves also occur in the Carolinas while black mangroves range along the gulf coast of Mississippi, Louisiana and Texas. Both white and button mangroves can also be found in Texas. Mangroves appear along tropical and sub-tropical coasts around the world. There are two non-native mangroves that have escaped and are invasive in Miami-Dade county, Lumnitzera racemosa (common name kripa) and Bruguiera gymnorhiz (large-leafed orange mangrove). You can read more about them in this Miami Herald article.


All four Florida mangroves have simple leaves that are entire (not lobed nor toothed). Buttonwood has alternate leaves, the other three mangroves have opposite leaves. Red mangrove leaves are elliptic shaped and leathery. Black mangrove leaves are elliptic to lanceolate and green on top with a grayish pubescence on the underside. White mangrove leaves are oval shaped, leathery, smooth, succulent, light green on both sides and often with a notched tip. They have a prominent pair of glands on the petiole just below tha base of the leaf. Buttonwood leaves are oblong, shiny green on top and lighter below with a tip coming to a point and a pair of glands along the margin at the base of the leaf.


The glands of white and button mangroves are widely, but possibly erroneously, said to be salt-excreting glands. Their function is unclear, but they may be extra-floral nectaries or vestigial remnants of no-longer functioning nectaries.


Two of the native mangroves have specialized adaptations to help them survive in the soft moist sediments along the shoreline. These characteristics make very convenient methods of identification. Red mangroves have distinctive prop roots arching out from the trunk and dropping from branches. Black mangroves have widespread shallow root systems that send up aerial roots called pneumatophores. In additon to helping with stabilization, both the prop and aerial roots assist the plant in taking in atmospheric gasses that are not availible in the anaerobic soils where they grow.


Red mangrove flowers appear in clusters of two to four growing from the leaf axils and are about 3/4 inch in diameter with four pale yellow narrowly triangular to lanceolate sepals and four creamy-white narrowly lanceolate to linear recurving wooly petals that turn brown with age before dropping. Black mangrove flowers are borne in conical clusters with each flower having a yellowish center surrounded by four white petals. White mangrove flowers are in a raceme that grows from the leaf axils and the branch tips. Each flower is tubular, pale green with five greenish-white petal lobes. Buttonwood flowers are in clusters of spheres (the 'buttons') that also grow from leaf axils and branch tips. The individual flowers are tiny and numerous and mostly bisexual with a two-winged tubular base and a cup-like calyx with five lobes, 5 to 10 protruding stamens and a slender style.


Three of these species have a unique method of propagation called viviparity. In plants this is when the seeds germinate and sprout while still attached to the parent plant. Black, red and white mangroves are viviparous allowing the sprouted fruit - called propagules - to drop and typically float to another location to take root. Button mangroves do not exhibit viviparity.


The fruit and propagules can also assist in identification of the mangrove species. Red mangroves develop the most while still attached, the cone shaped fruit being dwarfed by the long green radicle that extends from the apex. Black mangrove fruit is a flattened pod that somewhat resembles a lima bean. These can often be seen washed up along the shore with the fuzzy radicle protruding from the split open propagule. White mangrove fruit is a small flattened, ribbed cone that is wider towards the tip and the propagules have a root-like radicle that can be seen while still on the tree or more frequently while floating in the water. Buttonwood fruits are a sphere with a diameter of about a half inch that turns purplish-brown when mature.


Mangroves are expanding their range northward as a result of climate change. Coastal areas that were historically salt marsh are slowly evolving into mangrove dominated habitats. Both salt marsh and mangrove ecosystems are important and have their advantages, however the long term effects of this change is unknown.